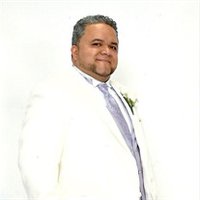 Crystian M Gonzalez , 44 , of West Haverstraw NY passed away on October 21, 2017 in the presence of his loving wife. He was born on September 5, 1973 in Tamboril, Dominican Republic to the loving Parents Manuel Antonio Gonzalez and Zoila Asuncion Gonzalez. Anyone who knew Crystian will remember his caring ways, dedication for his family, love for his wife and children and compassion he showed his friends. He is predeceased by his father, Manuel Antonio Gonzalez and sister, Olga Gonzalez. Crystian is survived by his wife Janet Gonzalez, his two loving sons, Jonathan M. Gonzalez and Christopher M. Gonzalez. His sisters, Sonia Otero, Zoila Rosa Gonzalez, Miosotti Deleon, Elba Luisa Gonzalez and brothers, Pedro and Roberto Gonzalez and many nieces and nephews. The family will be receiving friends and relatives on Wednesday, October 25, 2017 at the TJ McGowan Sons Funeral Home, 133 Broadway, Haverstraw, NY 10927 during the hours of 2pm till 4pm and 7pm till 9pm. A mass of Christian burial will take place on Thursday, October 26, 2017 at St. Peters Roman Catholic Church at 10am. Crystian will be laid to rest with a private cremation.